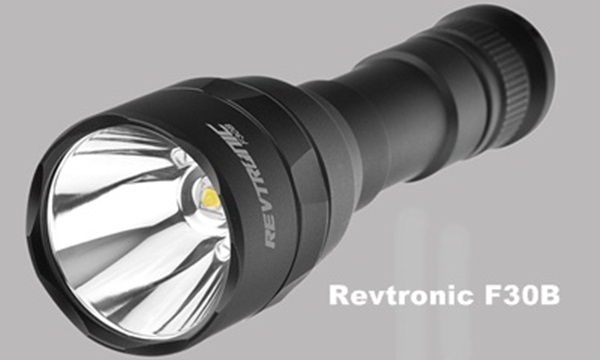 The Revtronic F30B Cree XM-L2 LED Flashlight is a relatively dependable but humble flashlight. If you're expecting a flashlight that can unleash thousands of lumens then this is not the kind of item for you. However, if you want something that works well in either an emergency situation or a campsite then it's one of the better choices aroun. It has all the right features, and it can withstand a lot of abuse. So if you're interested in this product then here's what you need to know.

Although it's not exactly a very powerful flashlight, the Revtronic F30B Cree XM-L2 does have plenty of nice features. For starters, it has five modes: high, mid, low, strobe and SOS.

Five modes aren't always practical, but seeing as how the F30B was designed for non-urban environments, they are quite justified. Also, the SOS and strobe modes are quite powerful even if are not as bright as other flashlights on the market.

The next important thing that you should know about the F30B is that it is both impact resistant and corrosion proof, so there's no need to worry about external damage. The downside, though, is that all this external protection cannot prevent the occasional minor malfunction, but despite this problem, the F30B works quite well in emergency situations and can take a lot of punishment from dirt and moisture.

Finally, it's worth mentioning that this flashlight is powered by a 1 x 3.7V 18650 Rechargeable Battery. Now, rechargeable batteries may not seem important for some people, but this device is just as tough as the actual flashlight and can withstand a lot of things that the flashlight is designed to resist. So if durability is an important feature for you then the F30B certainly has what you need.

The Revtronic F30B Cree XM-L2 LED Flashlight can be described as a humble, but versatile flashlight. Unlike many flashlights on the market, it doesn't release thousands of lumens, but even so, it's powerful in its own right.

With an output of 800 lumens, a durable casing, good weight distribution and various other positive characteristics, it is a very good flashlight to have around. Despite its humble appearance and design, it works well in difficult environments and campsites. And thanks to its five modes, it also has a bit of versatility.

The only problem is the reflector, which may occasionally put out less light than it should, but this minor malfunction can be solved either by turning the flashlight on and off or by switching from one mode to another. This is a relatively common problem for flashlights that have multiple modes, and it seems that the F30B Cree XM-L2 hasn't solved this particular issue either.

Other than this one particular problem, though, the flashlight works very well, and it certainly offers a lot of value for its price. So if you need a good flashlight then the F30B Cree XM-L2 has a lot of nice things to offer you.